I witnessed a most awesome natural event today. I observed a bear taking down a deer. Please read my story. 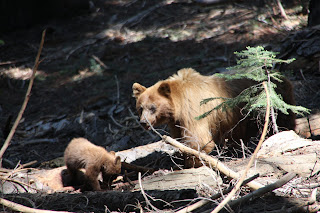 I had read in all of my Black Bear text books and I had been teaching for years that Black Bears were not good hunters. I taught that they were mostly lazy opportunists who would eat meat when they discovered some carrion. Today I learned differently first hand.

I had just returned to my cabin from guiding a hike to prepare some lunch for myself. As I walked from the government vehicle to my cabin I had to have walked very close to these animals but I never saw them. I opened the door to my cabin to let some fresh air in like I frequently do. As I opened my door I noticed a local resident deer that I had not seen in a while. She had her new offspring with her. The new deer was larger than a fawn but was not yet full grown either. I thought I would get a picture so I went for my camera. I always keep it close by.

About that time, I noticed a bear with two cubs that I knew. They were sneaking around my partners’ cabin stalking the deer. I could see that the bear was teaching its cubs to stalk. The mother bear would look at her cubs as if to say, “Watch this.”

Then suddenly the bear made a fast mad charge for the young deer. This bear was really moving fast. It must have gone from a stand still to 35 MPH in no time. The bear charged the deer and hit it in its flank with its head, raising its head as it hit the deer. On impact the deer made a horrible sound. The wind was knocked out of the deer and many bones were instantly broken. The deer was thrown 15 to 20 feet up in the air and the bear moved under the deer and just waited for it to come down out of the air. The bear caught the door at the shoulder and dragged it off into the forest. The captured deer was crying, the mother deer was crying frantically and the cubs were screaming. It was a dramatic moment for everyone, including myself. The mamma bear was the only calm one.

The deer didn’t have a chance. The deer’s mother was running around screaming like a human woman. I had never heard a deer cry like that before. When the captured deer stopped crying, the mother deer exited the scene never to be seen again.

The bears settled in and began to consume the deer just yards from my cabin. I began taking pictures. They ate eagerly for 90 minutes. The cubs fought over the meal like wolves competing for position. They made little bear cub sounds as they ate.

They seemed to be eating every part of the deer. I could hear them breaking bones and I could see them tearing skin and fur. Once the bears had each had their fill, they rambled off into the forest to go do other bear stuff.

After the coast was way clear, I moved in to the consumption site. I discovered nothing. There was not a drop of blood, not a bone, not a tooth and not a hoof left behind. Every part of the deer was consumed by the bears. I was amazed. It would be interesting to see the bears scat in a day or so to see how much of the deer was actually digested.

Then I moved back to the kill site to track the event on the ground. I found no bear tracks except when the bear was running the last 20 feet to hit the deer. I photographed a couple of tracks but there was literally nothing remaining anywhere from the entire event. No blood, no body parts, just a couple of bear tracks in the sand and they are probably gone by now. Gone without a trace.

I will never again teach that bears are not good hunters. I have witnessed for myself first hand that they are indeed superb and swift hunters. I will share this story with many people in my bear lectures in Yosemite. Bears are amazing animals. I learn a lot from the bears.

The message in this story is… “Always clean your plate.” “You snooze, you loose.” “May the best man win.” “No mercy.”

That was a truly awesome experience for me. I will never forget it.

PS As I thought about this event, I believe the bear hit the deer with its head instead of biting the deer in hopes that the bear could kill the deer with no blood shed. The bear was planning on the impact killing the deer. The reason a bear wants no bloodshed is because there could be other bears in the area and the other bears could easily smell the spilled blood and quickly become competitors for the kill. Also the bear could have just as easily killed the doe instead of the does offspring. The doe was really more than the bear and two cubs could eat at one sitting. Bears are great conservationists so they won't kill more than they can eat and waste it. Also by sparing the doe, she will give birth to another deer in the spring whick will be another opportunity for the bears. 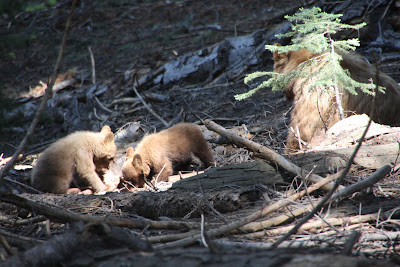 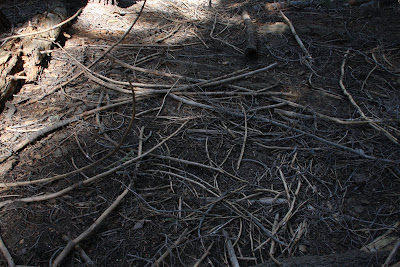 Poor picture. Sorry. This is a area where the bears consumed the deer. There is not a drop of blood, a bone, a tooth or a hoof left to be seen. 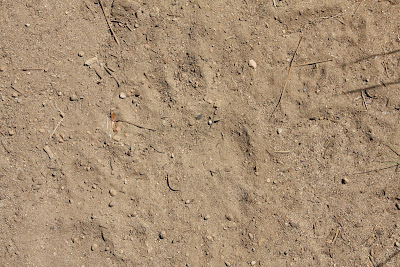 Footprint of the bear as it was running for the kill. The foot print is about 7 inches wide.
Posted by Ranger Dave at 13:45